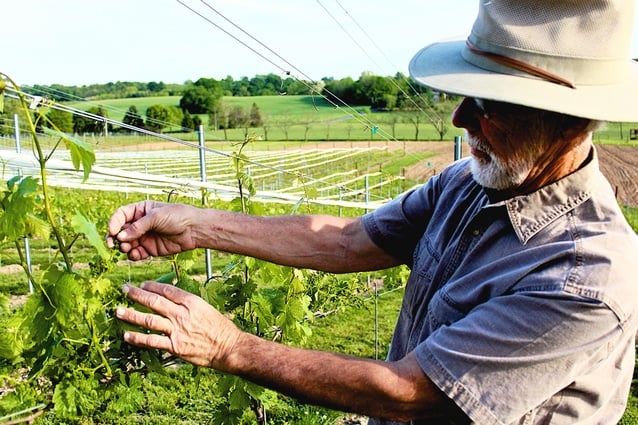 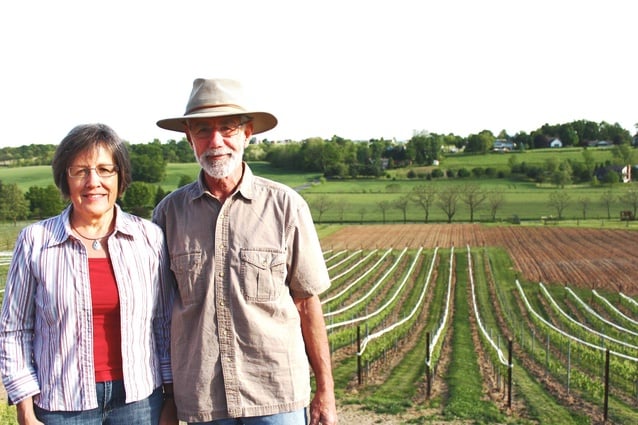 Larry and Marilyn Kennel after a hard day's work at The Vineyard at Grandview. (K. Scott Kreider)

Surrounded by picturesque farmland and forests in Mount Joy Township, lush rows of grape vines point to a new construction perched on a hill: a soon-to-be winery and tasting room.

The Vineyard at Grandview, at 1489 Grandview Road, is the only commercial vineyard in Mount Joy Township. Once the winery is finished, it may well become a destination for tourists looking to sample some local fine wine.

Larry and Marilyn Kennel, founders of the 5.25-acre Vineyard at Grandview, have been growing grapes for wine along with their two daughters and sons-in-law since 2009. They plan on opening the winery and tasting room as early as spring 2013, when they will feature wines under their label.

Larry Kennel, a veterinarian who specializes in embryo transfers for cattle, first started making wine from wild berries as a hobby in 2004.

"At that time I didn't help too much," Marilyn Kennel said. "It was kind of his hobby; I just gave him space to do it. He would bring in garbage bags full of elderberries, then he would set up a chair in an old refrigerator box so he could de-stem the berries without making a mess."

Soon Kennel's hobby would become a dream for a full-fledged winery when he learned in 2007 that the soil on his property, as well as their farm's location, was actually well suited for grape growing. "We're on what is known as Bedington loam. It's a shaley soil that drains very well," Larry Kennel said.

"Another reason that this particular area where we're sitting is good for grapes is that we're sitting in sort of a rain shadow." After the revelation - and two years of attending workshops, studying, and getting advice from other vineyard farmers - the Kennels planted their first vines, cabernet sauvignon and merlot, in 2009.

Mark Chien, a viticulture educator at Penn State who meets with and advises many grape growers across the state, said of the Kennels' vineyard, "He did his homework, and he has a pretty good vineyard site. From the technical standpoint he has done everything right."

The Kennels said that they learned a lot from Chien, as well as Jeff Zick and Jan Waltz of Waltz Vineyard. "Jan Waltz was a consultant for us as we planted grapes. We depended on him a great deal to tell us what to do. He's been a very good source of information for us," said Larry Kennel.

Last week the Kennels finished all of their planting for the season, as they put in the last of 1,604 albarino vines and 370 muscat vines. But the work will not stop there; tending the vines until harvest takes meticulous care.

Harvesting the grapes is a task too large for the Kennels to do on their own, as the grapes are all picked by hand. Last year they invited friends, family, neighbors and members of their church to join in the harvest, making it a sort of community event, Marilyn Kennel said. The Kennels plan to do the same again this year.

Right now Allegro Winery in York County is making wine with the Kennels' 2011 harvest. This wine will be sent back to Mount Joy Township in bulk to be bottled there under The Vineyard at Grandview's label.

The 2011 harvest should yield more than 7,500 bottles of wine, which will remain in storage at Allegro until the Kennels get a license to sell. They expect to get about 10,000 bottles of wine out of the 2012 vintage.

"Agritourism is a benefit for the farmers because it can provide additional revenue," said Stephen Gault, township engineer, "but it also serves to promote agriculture as a whole, and it can have a wide range of economic and communal benefits to the area as a whole."

One way that Mount Joy Township seeks to help develop more agritourism projects such as The Vineyard at Grandview is by easing zoning restrictions, Gault said.

Certainly, vineyards and wineries are one way to enhance agritourism here in Lancaster County, said Chien. "As a value-added product, there is really nothing that beats it. It may not be a staple of the American diet, but it has a place in the agricultural landscape here," Chien said.

"Right now as other traditional commodities plateau or even decline, wine is in the ascendancy," he said.