The Vineyard at Grandview in Mount Joy, Lancaster County, won five awards at one of the most prestigious competitions held nationally each year.

It announced that it won a double gold for its Grande Rouge, a Bordeaux blend, and four other awards at the San Francisco International Wine Competition (SFIWC), conducted from June 9 through 12.

The Grande Rouge is part of the winery's list of premium wines, featuring a blend of Cabernet Sauvignon, Cabernet Franc, Merlot and Petit Verdot. It's aged for 22 months in French oak barrels.

Those four awards went to the following Vineyard at Grandview wines: 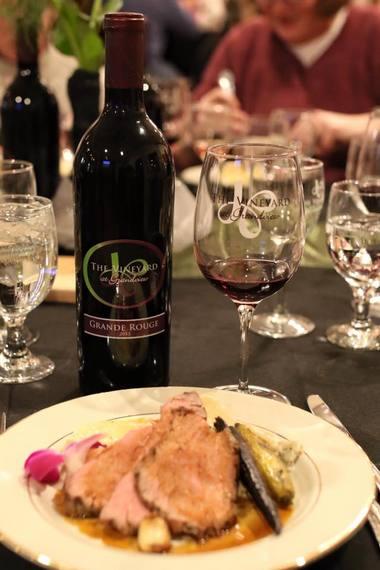 The Grande Rouge, which was served at a pairing dinner in late January at The Vineyard at Grandview.Facebook

Winemaker Larry Kennel said in a release that no other Mid-Atlantic winery has won a double dold in the Bordeaux blend category at the San Francisco competition in more a decade, according to the SFIWC website results listings, and only one other winery east of the Mississippi has achieved this distinction.

According to its website, the SFIWC is the largest and most influential international wine competition in America. It has been setting the standard for professional wine judging since its debut in 1980. Now in its 36th year, the SFIWC maintains the highest level of integrity with a blind tasting system performed by a highly experienced panel of internationally acclaimed wine experts.

The SFIWC website explains the judging procedure as follows: "During the first round of tastings, each wine is judged on its own merits, within the context of its own class. Judging panels are provided with information on varietal and vintage. . . . Specialized judging panels confer to determine which entries are worthy of Bronze, Silver, or Gold medals. If all judges on a panel unanimously agree that a wine merits a Gold medal, it receives a Double Gold award."

The Vineyard at Grandview is a family-owned vineyard located amid the rolling hills of northwest Lancaster County. The Kennel family has been growing premium vinifera grapes – Cabernet Sauvignon, Merlot, Chardonnay and more – since 2009. Here's a link to descriptions of the family members who operate this winery.

The winery's first vintage was in 2011 and it produced its first wines at the Mount Joy location in 2013.